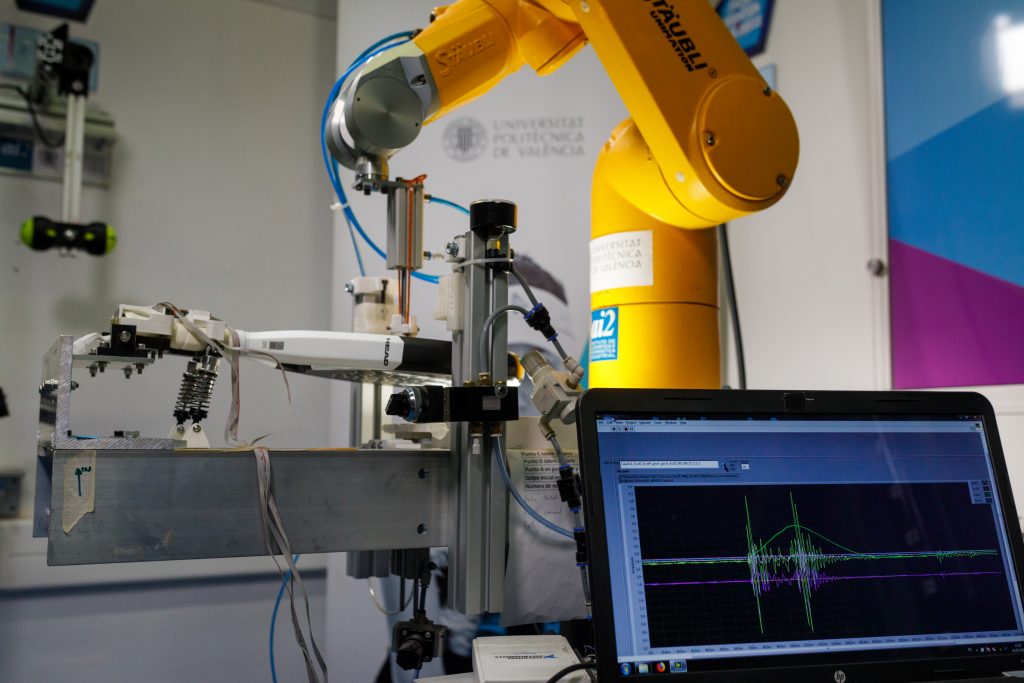 It could be your padel racket’s fault if your game has gotten worse.

One should not blame the material, but the world's first laboratory test of padel rackets shows that your racket may have actually changed. One of tested brands showed changed measurement values ​​by 25 percent after the endurance test.

The test was performed by Testfakta and included eight rackets from well-known brands in the price range from around 100 – 300 Euro, intended for the intermediate player. The shape is either round or teardrop. They all weigh 364 – 368 grams and thus also fit players with less muscle strength.

The laboratory assigned was Testea Padel at the Universitat Politecnica de Valencia in Spain, the world’s only test institute for padel rackets.

Robots and sensors
Tests of the latest rackets can be read everywhere. But not even a professional can repeat a strike in exactly the same way countless times, measuring the degree of impact on the properties of the inner core after wear, or the force needed to damage the racket’s frame.

–       We can do all this and simulate it in a laboratory environment with the help of robotics, computers, and sensors, says Jordi Piedra, founder and CEO of Testea Padel. As an engineer, I can finally produce scientific data that I, as a professional padel player, was missing.

The various components have been interpreted and rated in consultation with the laboratory. In the rating, control (20%), comfort (20%) and power (20%) have been weighted equally highly to suit a versatile player. The highest emphasis in the overall grade has been on quality and endurance (40%). Maximum score in all categories is 10. 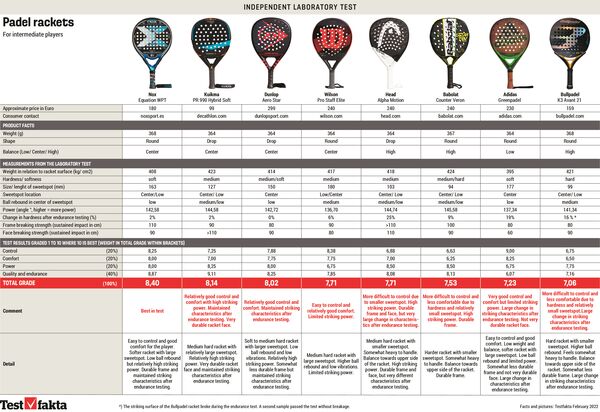 Sweetspot in focus
An important detail in a padel racket is the so-called “sweetspot”, the point on the racket where you get the best hit with the ball, both in terms of impact strength, precision, and comfort. All rackets in the test have a central or low-positioned sweetspot. A large, centrally located sweetspot generally makes it easier to hit, and gives less strain on the wrist and elbow. A lower placed sweetspot often gives better control for the less advanced player, but not as much power in a smash.

Runner up for just over half the price
Best in test was Equation WPT from Nox (8.4 / 10) which costs about 180 Euro. The main reasons for the high rating were the high scores on how easy it is to control the ball (large sweetspot, central / low placed) and comfort (slightly softer core) as well as the durable frame and very well-maintained impact properties after the endurance test.
Runner up was PR 990 Hybrid Soft from Kuikma, (8.14 / 10) which costs a little over half as much. Both the power rating and the durability are even slightly higher than with the test winner, but when it comes to control and comfort, the score was lower.

Comfort versus durability
The lowest rating in this test was given to K3 Avant 21 from Bullpadel (7.06 / 10) Small sweetspot with harder core makes the ball harder to control and gives more vibration, which reduces comfort. The Bullpadel racket was also altered a lot in terms of the overall characteristics after the endurance test.
The adidas Greenpadel ended up second to last, (7.23 / 10) mainly due to poor striking power and low scores on durability in the endurance test. However, this racket scored high on comfort with its softer core and low weight in relation to the overall surface. In addition, Greenpadel has a large, centrally located sweetspot, which provides good accuracy and control.

Try it out
To be able to guide a padel player to the exact right racket with certainty is a difficult task. Although there are certain basic conditions to consider, it depends very much on taste and personal preference which racket you are comfortable with. In general, for example, round rackets are recommended for beginners, but there are professional players who favor that shape as well. The best way is to try, borrow from each other and test. 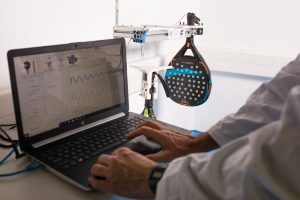