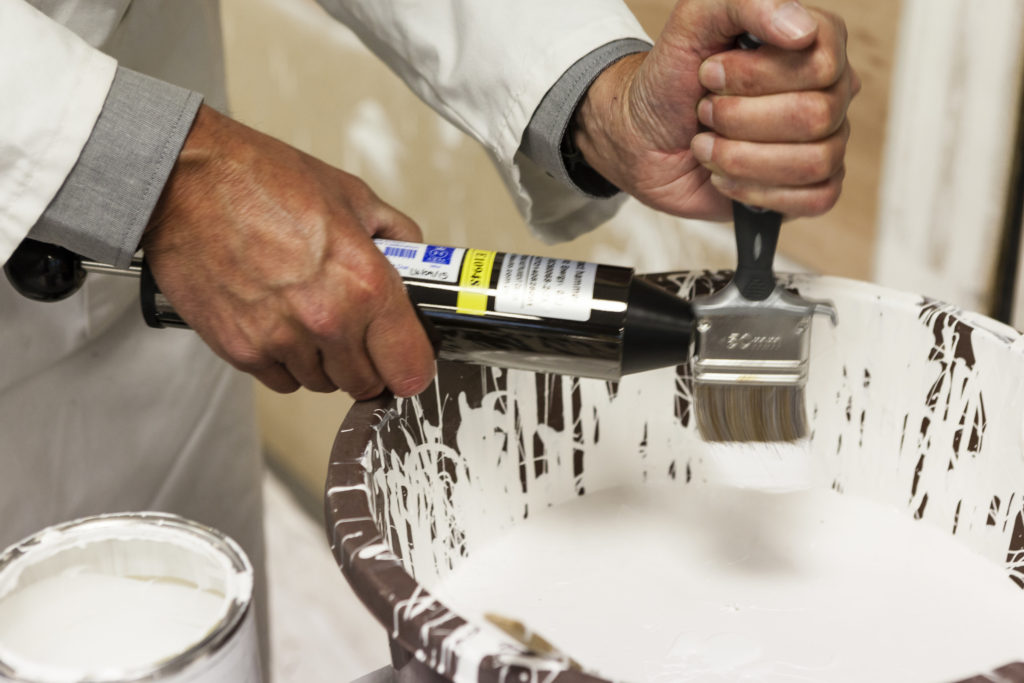 After being dipped in the bucket of paint, the brush was struck with what is known as a “spring impact hammer”. Photo: Frazer Waller

Go back to 'Good brushes make for faster work'

This laboratory test of flat brushes was carried out by Testfakta Research on behalf of Orkla House Care. The test was performed by Intertek Testing & Certification Ltd. in the UK.

The following brushes were tested:

All brushes had synthetic bristles and were 50 mm in breadth.

Five brushes for each brand were purchased from shops and tested using an ordinary water-based wood paint (Servalac Exclusive high-gloss) in white. The laboratory test was performed by three test engineers who repeated each part of the test three times with each brush. The test results consist of both technical measurements and professional evaluations.

Ability to pick up and release paint by weight

Each brush was dipped into the pot of paint until the bristles were half-submerged. Each brush was held in the pot for five seconds and then allowed to drip for a further five seconds. After this, any surplus paint was struck off using what is known as a “spring impact hammer”. This is a controlled method equivalent to the short side of the brush being hit against the pot. A surface was then painted in a vertical motion until the brush could no longer release any more paint. By weighing the brush before and after the paint work, the test engineers could measure the brush’s ability to pick up and release paint.

Ability to pick up and release paint by number of dips

The brush was dipped and allowed to drip following the procedure described above. A surface of 0.6 x 0.41 m was painted using as few dips as possible, while also focusing on achieving a good end result with regard to coverage and smoothness. The number of paint dips needed to cover the given surface was counted. To ensure that the test engineers painted in layers of roughly the same thickness, the surfaces were weighed before and after painting.

Ability to pick up and release paint by measurement of brushstrokes

The brush was dipped and allowed to drip following the procedure described above. A vertical brushstroke was painted with the best coverage possible. By measuring the length and coverage of the brushstrokes they could make, the test engineers were able to measure the brush’s ability to pick up and release paint.

The quality of the end result was rated in a special light space. The evaluation included aspects such as the uniformity of colour dispersion and whether there were any traces of brush marks.

The test engineers evaluated how good the brushes were at painting corners and rounded mouldings by painting details on a round footstool. The evaluation included both how easy the brush was to handle and the end result on the painted surface.

In order to evaluate how easy the brushes are to manage and control, the test engineers would paint as dense and straight a line as possible. The test was intended to simulate painting a window frame, or any similar edge where one wants to paint as close to the line as possible.

The test engineers evaluated the brush’s handle and balance.

The test engineers’ overall evaluation of how good or bad the brushes are to paint with, and whether they are easy to clean.

The number of bristles lost was noted over the entire course of the test.

Hard brushes have a tendency to splash more than soft brushes when painting. To measure the differences between the brushes, they were each mounted onto a rotating wheel, which was then stopped abruptly. The amount of paint the brushes sprayed when the wheel stopped was then measured.

The brushes were placed in a water bath for 24 hours, after which it was evaluated whether this resulted in any discolouration or rust anywhere on the brushes.

Weighting of the results

The results of the test elements were rated on a scale of 1 to 5, where 5 was the best.

In the overall result, the different test components are weighted in the following way: