Eight comparable shoes from the major brands in the Nordic market were tested. Photo: R. Kihlström

Best shoes capable of both cushioning and propulsion

Spring is here, and running with it. But how are we to know which running shoe is best? Testfakta has done the testing.

Testfakta tested eight different models of women’s running shoe priced up to SEK 2,000. All the shoes were both test-run by 11 experienced female runners and tested in a laboratory, where shoe cushioning and rebound were measured.

A good running shoe is crucial both for getting the maximum effect from training and to reduce the risk of leg injuries. But what is ‘good’ varies from one person to another.
‘When you run, your entire body weight hits the ground, on one foot at a time. Untrained people lack the musculature required to tolerate this force well. So for beginners or heavy people, good cushioning that can help absorb these high-impact forces is especially important,’ says head of testing Dr Thomas Mühlbauer, Professor of Movement and Training Sciences/Biomechanics of Sport at the University of Duisburg-Essen. 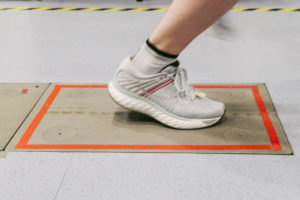 Shoe cushioning was measured in the laboratory using a pressure-sensitive plate. Eleven female subjects ran across the plate using all eight shoes. The more the shoe cushions the impact, the less force is exerted on the runner’s body with each stride. The Saucony shoes have the best cushioning, followed by Hoka One and Adidas. The Altra shoes have the worst cushioning.

Experienced runners have often both built up musculature and acquired a running technique that reduce muscle and joint strain from running. These runners may, instead, be interested in a shoe with as high a rebound as possible. Nike markets its shoes as energy-returning — that is, the runner gets a higher-than-usual proportion of the energy back, thanks to special foam in the sole. But how well does this work in practice? Do other shoes have similar properties? The laboratory test engineers have designed a test to measure the rebound effect of the shoes.
‘This effect varied considerably from one shoe to another. But the Nike Air Zoom Pegasus 36 isn’t the only one to give a strong rebound. The Saucony and Adidas shoes perform very well too,’ Mühlbauer says.

Besides the laboratory tests, 11 experienced runners test-ran all the pairs tested, on both a running track and gravel. After each run, they assessed the overall running properties and stability of the shoes.

In terms of stability, the runners rated the Brooks shoes highest, but Adidas and Saucony received high ratings too. Brooks also won the runners’ hearts in terms of overall running properties, closely followed by Saucony and Adidas. The runners rated the Altra shoes, which ranked lowest in the tests, as worst in both categories.
‘All the shoes have different properties, which suit different people. But the testing also shows that our measured values ​​from the lab tally well with how the runners rated the shoes. This means that if you can test-run the shoes before buying them, chances are you’ll find a pair that suits you in particular,’ Mühlbauer says.