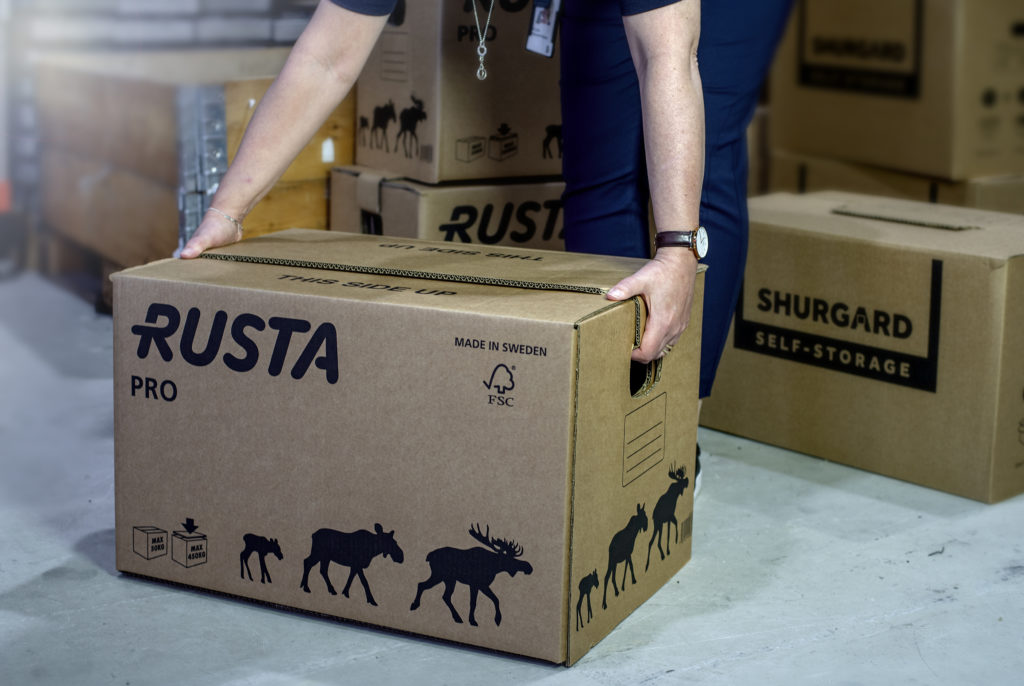 Testfakta’s quality standard has tough criteria. The packing boxes undergo a standardised testing regime that covers strength, stability, ergonomics and ease of use. To meet the criteria for the quality standard, the packing box must perform consistently well in every part of the test. Carrying the Verified Quality & Performance mark guarantees that the product offers thoroughly good quality. 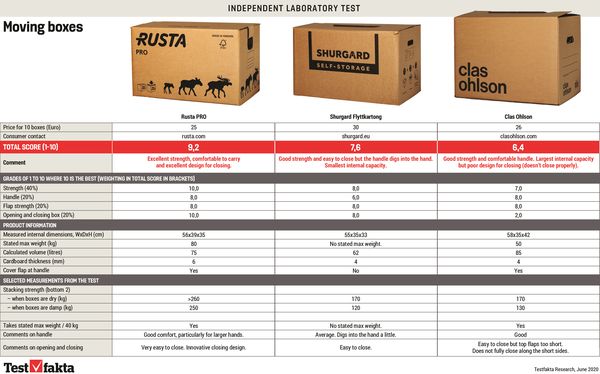 Laboratory tests on the packaging boxes were conducted by the independent testing body RISE Research Institutes of Sweden. The test involved the following elements:

Stacking capacity (dry packing boxes)
Two boxes were packed with 18 kg of books in each and stacked on top of each other. A third box was placed on top and loaded up with 15 kg. The weight in the third box was then increased up to 260 kg or until one of the two lower boxes collapsed. Box three was initially loaded with 50 kg, and then the load was increased in 25 kg intervals until the total weight was 100 kg. From 100 kg the weight was increased by 10 kg at a time until the boxes collapsed or the maximum weight of 260 kg was reached. The amount of weight added to box three was noted. The packed boxes are moistened to simulate exposure to rain. Photo: Anna Sigge

Box two was moistened with two sprays of water on the short sides and three sprays on the long sides, plus one spray on each corner. The moistening process was repeated once again (total 28 sprays). Immediately afterwards, box three was stacked on top and packed with weights in the same way as for the dry boxes until the boxes collapsed. The amount of weight added to box three was noted. Once 100 kg had been added, the boxes were moistened again using the above procedure. The amount of water simulated the box being exposed to a damp climate or being carried between house and van in rainy and humid weather. To assess the ergonomics of the handles, the boxes are carried with a load of 40 kg inside. Photo: Anna Sigge

without damage. The boxes were packed with 40 kg and then two people lifted the box andcarried it a set number of metres. Any damage to or weaknesses in the box were noted.

Handle ergonomics
The design and comfort of the The construction and closure of the boxes is assessed. Photo: Anna Sigge

handles was assessed. The boxes were packed with the max weight of 40 kg and two people liftedthe box, one at each end, and carried it over a straight distance of around 3.5 m, after which the box was placed on the ground. The procedure was repeated five times and the design and comfort of the handles was assessed.